I am curious about a few install items.

Overall the lock is easy to install, just some thoughts of mine.

I installed the installed the meta pocket because I too think it would make the the lock stronger particularly if the door was being kicked in.

I also installed the door sensor. Your right the sensor is required to be placed in a position that is susceptible to damage.

One of the main features I bought the lock for was the integration between the sensor and the lock. It won’t engage the lock unless the door is closed. This works ok most time when using the door manually or bluetoooth, but not always.

However, my biggest beef with the lock is that the door sensor OPEN/CLOSE status is not communicated over zwave. So I can remotely see if he door has been locked as well as lock /unlock it. But I can’t remotely tell if the door has been left open.

I skipped the metal pocket behind the strike plate, but used longer screws for more security, though in reality neither will stop a determined intruder. Having any deadbolt is the safe thing since a typical doorknob only can be popped open easily with a credit card.

I’ve had the door sensor installed on an in swing and outswing door for well over a year now using a tiny screw on the trim around the door framing and I haven’t gotten it caught or knocked off yet. I thought the same thing though at first but it hasn’t been a problem. I’ve seen on here that some people have had no issues after burying the door sensor into the frame by drilling a hole for it, but I haven’t resorted to that.

Can’t speak to the Zwave status, I’m just using the WiFi version and of course the open close status shows there with the app. Haven’t tried any other smart integrations as I’ve found the autolock to be reliable on its own without having to rely on something else.

I didn’t install the metal pocket, mostly because it didn’t fit my door and I’m too scared to mess with the frame, drilling, or whatever needs to be done for it to fit cleanly.

I did make sure to install the sensor, as that was key for the locking mechanism to work as I expected. I know it seems like it’s a protrusion that will get knocked off through every day use, but so far, I have yet to have that happen (but it’s only been about 6-7 months). Fingers crossed it holds!

I too skipped the metal socket. Instead, i opted to add 2 long stainless screws in place of the shorter ones included.

I use the door open sensors, however, i removed the magnet from the case, drilled a hole just big enough to hold the magnet just below the latch plate near the inside of the frame. 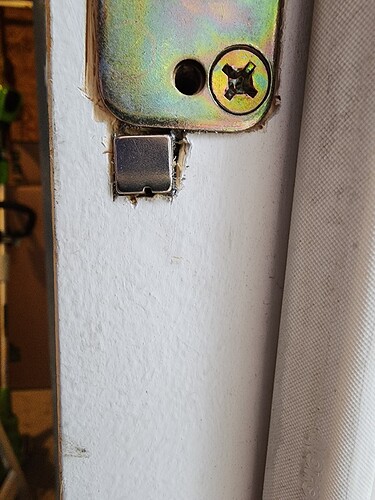 I haven’t rekeyed the locks yet (I have 4 locks on this house) but that is next. Apparently locks are shipped with either Kwikset or Schlage keyways, but I’ve installed 6 and so far, all have been Schlage keyways.

I also installed the metal pocket, I have french doors. I need to pull the door slightly when leaving the house so the bolt can complete its action, otherwise I’m told it has jammed. I feel the slightly domed shape of the pocket is causing some issue but perhaps it helps keep the bolt more secure.

I’m installing the brass bolt receptor or whatever they call it. I didn’t even really see any directions about it. I did drill a hole with a hole saw. The hole that was their from the home builder wasn’t deep enough anyway to for the bolt itself so I figured I might as well go all in.

FYI, the door lock install kits from Amazon, Harbor Freight, Lowe’s and Home Depot are $30 or less. Relatively easy to use. I used a Dremel bit to finish chiseling out the spot for the plate to be recessed. I say plate because then I had a duh moment and remembered the part needing to be chisled out is really for 2 plates, if I want them both to be recessed into the jamb. I suspect, the way my door works, since it is only a deadbolt, that the silver strike doesn’t need to be recessed. But I’d rather be safe than sorry. IF this is a supplemental lock and your regular door lock is staying than it definitely needs to be recessed.